HORMONES 2013, 12(1):142-145
DOI:
Historical note
Maximinus Daia, a Roman emperor who may have had Graves’ disease and died of a thyrotoxic crisis
Peter D. Papapetrou

Evidence is presented that the Roman emperor Maximinus Daia had Graves’ disease and died of severe thyrotoxicosis. The information about this emperor’s terminal illness is drawn from the writings of the 4th century writers Eusebius and Lactantius. An existing statue indicates that the emperor had bilateral Graves’ ophthalmopathy.

In the year 305 A.D. the two Roman Emperors (Augusti) Diocletian and Maximian abdicated and a new system of imperial government known as the Tetrarchy was set up. The new government included two Augusti and two Caesars. One of the new Caesars was Maximinus Daia (known also as Maximin) who was entrusted with the governing of Syria and Egypt. During the ensuing years several civil wars broke out between the rulers of the Roman Empire. In the winter of 313 Maximinus Daia started a civil war against Licinius. He moved from Syria through Asia Minor, crossed the Thracian Bosporus, occupied Byzantium, and further north took Heraclea. In the vicinity of that city a battle between the armies of Licinius and Maximinus Daia was waged. Licinius was victorious, while during the battle (April, 313), Maximinus Daia, abandoning his troops, fled initially to Nicomedia and subsequently to Tarsus where he died about four months later.1 Maximinus Daia was born in November 270 and died in August 313, and his final illness and death is the subject of the present article. The fourth century writers Eusebius2 and Lactantius3 described Maximin’s death in considerable detail, mentioning symptoms and signs of his fatal illness which are compatible with what is today known as Graves’ disease. The relevant excerpts from the works of Eusebius and Lactantius are given below in English translation, along with our comments (in bold) on specific points within these texts. An extant statue of the emperor evidences his Graves’ ophthalmopathy.

The following excerpt is from Ecclesiastical History, Book IX, Chapter X, 14-15.2 “But the circumstances of his death were not such as fall to the lot of generals on a campaign, who time after time contend bravely on behalf of virtue and friends, and with a good courage meet a glorious end in battle; but he suffered his due punishment like an impious enemy of God, skulking at home while his army was still stationed in battle-array on the field. All at once he was smitten by a stroke of God over his whole body, with the result that he fell prone under the onslaught of terrible pains and agonies; he was wasted by hunger, and his flesh entirely consumed by an invisible , divinely-sent fire; the form which his body once possessed wasted away and vanished, and there remained only a form of dry bones, like some phantom shape long since reduced to a skeleton, so that those present could not but think that his body had become the tomb of his soul, which had been buried in what was now a corpse and completely wasted away. And as the heat consumed him still more fiercely in the depths of his marrow, his eyes projected, and, falling from their sockets left him blind. Yet he still breathed in this condition, and making confession to the Lord invoked death. So with his last breath he acknowledged that he suffered thus justly because of his violence against Christ; and then gave up the ghost.”2

Our comments on some passages (in bold) of the Eusebius text are the following. “Skulking at home”: During the battle between Licinius and Maximin near Heraclea, Maximin fled, first to Nicomedia and later to Tarsus, without his imperial ornaments.1 Was this humiliating flight due to cowardice or to the fact that Maximin was already ill, i.e. thyrotoxic? The battle took place in April 313 and Maximin died about four months later at Tarsus at the age of 42. “Wasted by hunger”: the Greek word in Eusebius text is limos; the meaning of this word is a severe shortage of food resulting in hunger and starvation and death; a second meaning of the Greek word is hunger. Oulton translated limos to hunger because it is unlikely that Maximin was facing a shortage of food. Therefore it can be concluded that Maximin suffered profound weight loss while experiencing extreme hunger and presumably despite increased food intake; the latter hypothesis may be reasonable since no dysphagia is mentioned. “His flesh entirely consumed…; the form which his body once possessed wasted away and vanished, and there remained only a form of dry bones, like some phantom shape long since reduced to a skeleton”: The emaciation described here could be the result of severe long-standing hyperthyroidism. “And as the heat consumed him still more fiercely in the depths of his marrow”: Oulton translated the word thermi in the Eusebius text as heat. However, this Greek term also means fever. Eusebius probably here describes a hyperpyrexia arising from deep in his body, which burned Maximin (thermis kataphlegousis in the Eusebius text means “fever burning” rather than “heat consuming”). This could be a thyrotoxic crisis which resulted in Maximin’s death. “His eyes projected, and falling from their sockets left him blind”: Eusebius using the verb falling from (Greek apopipto) probably intended to emphasize the severity of the eye protrusion. This seems to be a typical description of severe progressive exophthalmos leading to blindness.

The following excerpt is from the work Of the Manner in Which the Persecutors Died (Chapter XLIX):3 “While Licinius pursued with his army, the fugitive tyrant retreated, and again occupied the passes of mount Taurus; and there, by erecting parapets and towers, attempted to stop the march of Licinius. But the victorious troops, by an attack made on the right, broke through all obstacles, and Daia at length fled to Tarsus. There, being hard pressed both by sea and land, he despaired of finding any place for refuge; and in the anguish and dismay of his mind, he sought death as the only remedy of those calamities that God had heaped on him. But first he gorged himself with food, and large draughts of wine, as those are wont who believe that they eat and drink for the last time; and so he swallowed poison. However, the force of the poison, repelled by his full stomach, could not immediately operate, but it produced a grievous disease, resembling the pestilence; and his life was prolonged only that his sufferings might be more severe. And now the poison began to rage, and to burn up everything within him, so that he was driven to distraction with the intolerable pain; and during a fit of frenzy, which lasted four days, he gathered handfuls of earth, and greedily devoured it. Having undergone various and excruciating torments, he dashed his forehead against the wall, and his eyes started out of their sockets. And now, become blind, he imagined that he saw God, with His servants arrayed in white robes, sitting in judgment on him. He roared out as men on the rack are wont, and exclaimed that not he, but others, were guilty. In the end, as if he had been racked into confession, he acknowledged his own guilt, and lamentably implored Christ to have mercy upon him. Then, amidst groans, like those of one burnt alive, did he breathe out his guilty soul in the most horrible kind of death.”3

Our comments on some passages of the Lactantius text are the following: “First he gorged himself with food, and large draughts of wine”: Could this represent polyphagia due to thyrotoxicosis? “Grievous disease, resembling the pestilence”: In this passage, Lactantius probably had in mind an outbreak of a plague in Syria during some previous year which Eusebius called “anthrax” and which he described in book IX, chapter VIII of his Ecclesiastical History. “And to burn up everything within him”: A possible reference to hyperpyrexia. “He dashed his forehead against the wall, and his eyes started out of their sockets. And now, become blind…”: A description of severe progressive exophthalmos leading to blindness, with an erroneous explanation of its pathogenesis.

Lactantius (ca. 240 – ca. 320), a Latin-speaking native of North Africa, lived in Nicomedia when Dioclesian was emperor there, and later in Constantinople where he became an advisor to the first Christian Roman emperor, Constantine. He had no known connection with Syria. Eusebius of Caesaria (ca260-ca.340), born in Palestine, became bishop of Caesaria in 314 and published his Ecclesiastical History in 324-325. Therefore, Lactantius had not read the History of Eusebius, while Eusebius must have been familiar with the works of Lactantius. We can hypothesize that Eusebius had firsthand information concerning Maximin’s life and death, since his diocese was located in the province governed by Maximin and he was contemporary with this emperor. The fact that the major part of book IX of the Ecclesiastical History deals with the acts of Maximin Daia indicates his interest in the personality and the actions of this emperor. Taking into account the above considerations, it is reasonable to consider the report of Eusebius on Maximin’s final illness and death as more reliable.

Eusebius and Lactantius agree on Maximin’s affliction with blindness being associated with severe exophthalmos. That Maximin suffered exophthalmos is confirmed by an extant statue of this emperor of which a replica exists at the Pushkin Museum of Fine Arts in Moscow, this shown in Figure 1. This statue was probably made several years before the emperor’s death and indicates that Maximin had long-standing Graves’ ophthalmopathy. Gibbon1 recounts that Maximin “moved against Licinius out of Syria, towards the frontiers of Bithynia in the depth of winter. The season was severe and tempestuous; great numbers of men as well as horses perished in the snow; and as the roads were broken up by incessant rains, he was obliged to leave behind him a considerable part of the heavy baggage.” The stress from that misfortune might have precipitated the onset or a relapse of hyperthyroidism so that at the time of the battle (April 313) Maximin may well have been overtly thyrotoxic. 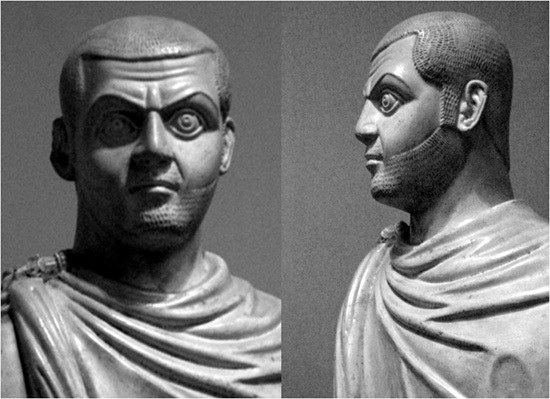 Figure 1. The emperor Maximinus Daia. Eye-lid retraction and exophthalmos are discernible. Cast in the Pushkin Museum of Fine Arts in Moscow after the original in Cairo (material - red porphyry). Alternative name of the original: Portrait of an Emperor, from Athribis, Egypt, porphyry, just over life-size, late Empire period, 3rd-4th cent. A.D. (Cairo Museum). The lefthand picture was taken from en.wikipedia.org, and the righthand picture from riversfromeden.wordpress.com.

Some uncertainty exists about whom, among several emperors, the Cairo bust (Figure 1) depicts: Maximinus Daia, Licinius or Galerius. Moreover, several unusual artistic features of this statue have been characterized as belonging to the sui generis Tetrarchic art developed in Egypt during the Tetrarchy (A.D. 284–311).4 It is important for our study to elucidate whether the appearance of the eyes of this statue is generally characteristic of the Tetrarchic style of portraiture or whether it does indeed illustrate a case of ophthalmopathy. It is assuredly this question that Rees4 had in mind when he remarked: “…the arresting eyes of the Cairo bust… are certainly curious; …and eyes with a piercing stare… The eyes stand out, aggressive and threatening.” It seems that Rees4 was hesitant to consider the eyes of this statue as representing normal eyes. Based upon the writings of Eusebius and Lactantius, Maximinus Daia was very likely afflicted with Graves’ ophthalmopathy. Using this evidence, we may further conclude that the Cairo bust very probably belongs to Maximinus Daia and that the sculptor depicted in it the emperor’s eye abnormality.

In conclusion, from the evidence presented in the present article it is very likely that the Roman emperor Maximinus Daia had Graves’ ophthalmopathy. During his terminal illness it seems that his exophthalmos became progressive, resulting in blindness, and that he died of severe thyrotoxicosis or thyrotoxic crisis, as the descriptions of the symptoms strongly suggest. Meanwhile, the Cairo statue very likely belongs to Maximinus Daia and depicts his ophthalmopathy.