Although Cushing’s syndrome has been described in association with various neuroendocrine tumors producing ectopic adrenocorticotropin (ACTH), primary ovarian carcinoma rarely causes this syndrome. We hereby report the case of a 61-year-old woman presented with abdominal distension, facial swelling and skin pigmentation. Clinical and diagnostic evaluation revealed a right ovarian tumor with hypercortisolemia, high plasma ACTH, extremely high plasma ACTH precursors and lack of dexamethasone suppression. Removal of the tumor led to normalization of ACTH, ACTH precursors and cortisol levels. In addition, hypokalemia, hyperglycemia and elevated serum CA 125 were noted, which were also normalized after resection of the tumor. Histopathological examination indicated a primary ovarian carcinoma with a mixed pattern of differentiation. Immunohistochemistry showed immunoreactivity for chromogranin A, synaptophysin and ACTH. Hence, the diagnosis of Cushing’s syndrome arising from an ovarian carcinoma secreting ectopic ACTH was made. The case was managed successfully, with subsequent good recovery and no evidence of recurrence at 4 years of follow-up.

Cushing’s syndrome secondary to ectopic adrenocorticotropin (ACTH) secretion was first described in 1928 by Brown as a ‘pluriglandular syndrome of the bearded woman’, and subsequently by Riggs and Sprague who reported this syndrome in association with various neuroendocrine tumors.1,2 Tumors of almost every ectodermal tissue can produce biologically active ACTH. The most common primary site of these tumors is the lung, followed by the thymus, pancreas and thyroid.3 Cushing’s syndrome arising from an ovarian tumor is relatively rare.4 It has been described in a wide range of nonepithelial ovarian tumors such as steroid (lipid) cell tumor,5-9 carcinoid,10 sertoli cell tumor,11 sex-cord stromal tumor,12 and teratoma.13 However, there have been only six well-documented cases reporting Cushing’s syndrome secondary to common epithelial ovarian adenocarcinoma.14-19

Herein, we report another such case of Cushing’s syndrome caused by an ACTH producing epithelial ovarian carcinoma, describing its presentation, diagnosis and management.

A 61-year-old woman presented with a 9-week history of abdominal distension, facial swelling and skin pigmentation. Systemic review revealed polydipsia and polyuria. Previously she had a normal menstrual history, with menarche at the age of 11 years and menopause at the age of 50 years. She had not taken any hormones or special drugs, nor did she have any surgeries. Family history was negative. On physical examination there were signs consistent with Cushing’s syndrome. She had a florid complexion with facial roundness and dark fine hair on the upper lip. The skin of her abdomen, back and arms as well as oral mucosa was diffusely hyperpigmented. Though she had a body mass index of 26.1 kg/m2, the trunk was obese whereas the limbs were thin and there was minor evidence of proximal muscle weakness. Visual fields were normal. Blood pressure was 205/110 mmHg. Abdominal examination revealed abdominal obesity with a large mass arising from the pelvis and reaching up to the level of the umbilicus.

Initial investigations showed hypokalemia with serum potassium 2.9 mmol/l, and hyperglycemia with fasting blood glucose 18.2 mmol/l. The level of HbAIc was elevated at 7.6% (normal range 2.8-5). Tumor markers, including carcinoembryonic antigen, CA 19-9, CA 15-3 and α-fetoprotein, were normal. In contrast, serum CA 125 was elevated at 214.6 U/ml (normal range 0-35). Urinary free cortisol was high at 496 nmol/24 h (normal range 35-255). Further investigations confirmed hypercortisolemia and high levels of ACTH with loss of normal diurnal variation; 0900 h plasma cortisol was 1264 nmol/l (normal range 145-610); midnight plasma cortisol 1243 nmol/l (normal range less than 170). 09:00 h plasma cortisol following overnight 2 mg and 8 mg dexamethasone suppression test was 990 nmol/l and 786 nmol/l, respectively. Levels of circulating ACTH and ACTH precursors determined by two-site immunoradiometric assay (IRMA) are shown in Table 1. Ultrasound examination of the pelvis identified a 20×13×18 cm multilocular cystic mass arising from the right ovary, with minimal free fluid in the pelvis. Computed tomographic (CT) pelvic scans confirmed the ultrasound findings and detected no additional tumors. Magnetic resonance imaging of the brain revealed a normal pituitary gland. CT scans of the neck, chest and upper abdomen, including the bilateral adrenal glands, did not reveal any abnormal lesions. In view of the invariably high ACTH and ACTH precursors plasma levels in conjunction with elevated cortisol levels that could not be suppressed by dexamethasone, together with the CT scans findings, a provisional diagnosis of ectopic ACTH producing ovarian tumor was made.

Metyrapone (1 g per day) was initially given to reduce the cortisol secretion, and the dose was increased up to 3 g daily. Because metyrapone alone became ineffective for controlling the hypercortisolemia, 3 g mitotane and 240 mg trilostane were administered daily together with metyrapone. After stabilizing the cortisol levels, the patient underwent exploratory laparotomy. Intraoperatively, a large multicystic right ovarian mass measuring 22×15×18 cm was found (Figure 1). The mass was removed, together with the ipsilateral fallopian tube. There were several nodules up to 2.0 cm in diameter adherent to the peritoneum, uterus and sigmoid colon with a small amount of ascites which was drained. The left ovary was atrophic. A total hysterectomy, left salpingo-oophorectomy, partial omentectomy, multiple peritoneal biopsies and pelvic paraaortic lymph node sampling were then performed. Almost all visible tumors were removed. 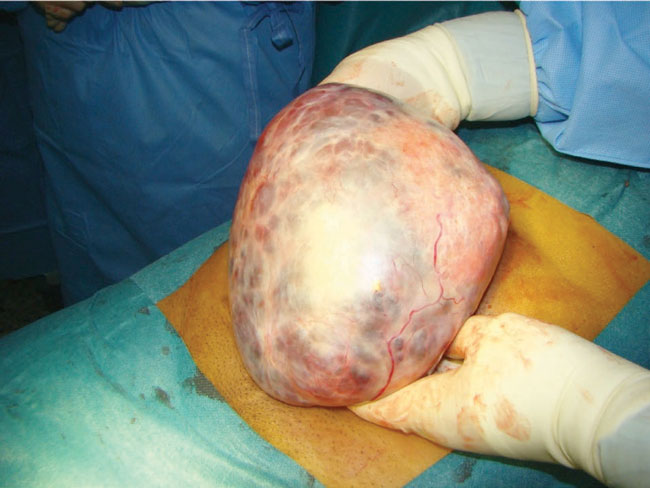 Cytology of the ascitic fluid was negative for malignancy. Histopathological examination of the excised mass demonstrated a primary ovarian carcinoma with a mixed pattern of differentiation. The tumor was composed of well-defined nodules of large polygonal and spindle-shaped cells. The cells displayed abundant eosinophilic granular cytoplasm with minor degrees of pleomorphism and numerous foci of squamous metaplasia. There was some evidence of tumor on the serosal surface of the ovary, consistent with invasion of the capsule. Immunohistochemistry showed the tumor cells to be strongly positive for chromogranin A, neuron specific enolase and synaptophysin, protein gene product 9.5. Some of the cells were strongly immunoreactive for ACTH. In situ hybridization with an alkaline phosphate linked oligodeoxynucleotide probe revealed patchy cytoplasmic staining for proopiomelanocortin (POMC) messenger Ribonucleic acid (mRNA). Northern analysis of total RNA elicited from the tumor (RNAzol, Biogenics Ltd) formed a band corresponding to the appropriate size for the pituitary POMC transcript on hybridization with the oligoprobe used in the situ studies.

The postoperative recovery was uneventful. She was put on hydrocortisone, which was gradually withdrawn over a 7-month period. The patient received adjuvant chemotherapy with intravenous carboplatin every 4 weeks for six cycles. At the 7th month’s postoperative visit, the body habitus and complexion were normal. Hyperpigmentation had resolved and there was no evidence of myopathy. Blood pressure was 130/85 mmHg. Repeat investigations noted normal electrolytes and fasting blood glucose. HbAIc and CA 125 were normal. Twenty-four hour urine free cortisol was within the normal range at 133 nmol/24 h. Short Synacthen testing was normal. ACTH and ACTH precursors were in the normal range (Table 1). The patient has remained free of disease with no clinical or biochemical evidence of hypercortisolism, and normal levels of ACTH and ACTH precursors, 4 years after surgery.

Cushing’s syndrome due to ectopic ACTH secretion occurs in around 5-10% of all cases of ACTH dependent hypercortisolism.20,21 The mean age of clinical presentation in this syndrome, as described in the literature, varies from 45 to 50 years, being higher when compared with the age of Cushing’s disease, which is 30-40 years.22 Hypokalemia occurs in 80% of the reported cases, including our patient, and in the several series; it is more severe than in Cushing’s disease.23,24 The more intensive hypokalemia in ectopic ACTH syndrome can be explained by the mineralocorticoid effect of cortisol, which in this syndrome tends to be higher than in Cushing’s disease and also because the activity of 11-hydroxysteroid dehydrogenase type 2, for reasons yet to be clarified, is decreased in patients with ectopic production of ACTH.23,24

Although Cushing’s syndrome is commonly characterized by hypercortisolism due to elevated ACTH levels from an extra-pituitary source, the cause is not only ectopic ACTH secretion but also ectopic production of ACTH-like peptides, corticotropin-releasing factor and cortisol.7,25 Stewart et al25 found that ACTH precursors were elevated in patients with ectopic ACTH syndrome compared to patients with Cushing’s disease. In our woman, the levels of plasma ACTH precursors were extremely high. Furthermore, the presence of positivity for ACTH and general evidence of neuroendocrine differentiation with positivity for chromogranin A and synaptophysin, the immunohistochemical and in situ hybridization evidence of POMC gene expression and the resolution of the Cushing’s syndrome after removal of the tumor all indicate that this tumor was the source of ectopic ACTH.

Limited proteolysis is a general mechanism via which a variety of active peptides can be produced from a common precursor. POMC undergoes extensive post-translational proteolytic processing in the pituitary corticotroph as a prerequisite for the coordinated production and release of ACTH from this large precursor molecule. The gene products responsible for this processing have been identified.26,27 Termed PC1, PC2 and PC3, these pro-hormone convertases are members of a large family of serine proteinases. They are expressed in the pituitary and are thought to cleave POMC as it is directed through the regulatory secretory pathway of the corticotroph. Ectopic ACTH syndromes are manifested by an abnormal circulating ACTH precursor: ACTH ratio.25,28 This may reflect aberrant POMC processing due to abnormalities in convertase expression, or aberrant trafficking of POMC through a non-regulated constitutive secretory pathway in tumor cells, where it is protected from convertase action.29

The prognosis of patients with ectopic ACTH syndromes is dependent on the nature of the underlying tumor and the presence of opportunistic infections. Although removal of benign ACTH secreting tumors yields an excellent long-term prognosis, most patients reported with malignant ACTH secreting tumors die either from carcinomas or opportunistic infections.31 Of the previous six described cases with Cushing’s syndrome due to epithelial ovarian carcinoma, only two patients had full remission of disease.18,19 Luckily, in our patient a good recovery with favorable outcome was achieved and no evidence of recurrence was noted in the 4 years of follow-up.

The author would like to thank Dr. Younis Kazim for his recommendations and continuous support and Mr Mohamed Mubarak for his excellent librarian assistance.