Hashimoto’s thyroiditis (HT), a common thyroid disease, is now recognized as an autoimmune thyroid disorder (AITD). However, surprisingly little is known about its discoverer, Hakaru Hashimoto, who first described the disease in 1912.1 He presented four patients with a chronic thyroid disorder, which he termed struma lymphomatosa, characterized by diffuse lymphocytic infiltration with germinal centers, fibrosis, parenchymal atrophy and eosinophilic change in some thyroid follicular cells. In this review, we recount the discovery of HT by Hakaru Hashimoto, its identification as an AITD, current concepts concerning its etiology, pathology, clinical diagnosis and histological variants of HT and the outlook for this disease.

Dr. Hakaru Hashimoto (Figure 1), born 5 May 1881, was the third son of a prominent family who had practiced medicine for generations in Iga Ueno, Mie Prefecture, Japan.2-5 He was one of the first graduates to receive a bachelor’s degree from the Fukuoka Medical College of Kyoto Imperial University in 1907. Hakaru Hashimoto received tutelage and training from Professor Miyake of the Department of Surgery of Fukuoka Medical College. Professor Miyake also instructed Dr. Hashimoto on the technique of assessing excised thyroid glands microscopically. In 1912, at the age of 30, Hakaru Hashimoto reported a distinct new disease in ‘Archiv für Klinische Chirurgie”, a German journal of clinical surgery.1 His paper, which consisted of 30 pages and 5 illustrations and centered on histological changes in thyroid tissue, discussed the results of his examination of thyroid tissue samples taken from four women. Hakaru Hashimoto further explained in his report that the new pathological characteristics he had identified, namely infiltration of lymphoid and plasma cells, formation of lymphoid follicles with germinal centers, fibrosis, degenerated thyroid epithelial cells and leukocytes in the lumen, were histologically similar to those of Mikulicz’s disease. He expressed confidence that he had discovered a new disease, which he named “struma lymphomatosa”, emphasizing the lymphoid cell infiltration and formation of lymphoid follicles with germinal centers, neither of which had previously been reported. 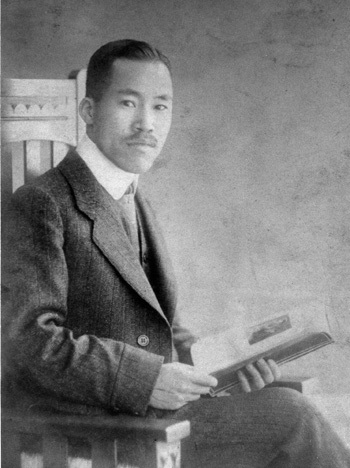 After the publication of his paper, Dr. Hashimoto studied pathological science under Professor Kaufmann, a leading German pathologist at the Göttingen University, where he researched renal tuberculosis for two years. He returned to Japan at the outbreak of the First World War in 1914. In 1916, he took over the family practice in his hometown. Since he was a graduate of the Imperial University and had furthered his education abroad, his reputation quickly spread throughout the country. Throughout his professional life, he treated all his patients with equal devotion and concern. He died of typhoid fever on 9 January 1934 at the age of 52, unfortunately without receiving the recognition he merited for his discovery, which would later be called Hashimoto’s disease.

In 1956, Drs. Rose and Witebsky11,12 showed that immunization of rabbits with extracts of rabbit thyroid produced histological changes in the thyroid glands resembling those seen in HT. They also found anti-thyroglobulin antibodies in sera from these animals. In the same year, Deborah Doniach and colleagues13 of Middlesex Hospital, London, purified an anti-thyroglobulin antibody from the sera of patients with HT and asserted that patients with HT have an immunological reaction to human thyroglobulin. Doniach also proposed that Hashimoto’s struma is an autoimmune disease of the thyroid gland. Following these discoveries, the concept of organ-specific autoimmune disease was established and HT recognized as one such disease. Doniach’s “letter to the editors” published in the Lancet in 1962 included a portrait of Hakaru Hashimoto that had been taken in Göttingen in 1912.14 From that moment on, Hakaru Hashimoto’s image and achievements became well known all over the world and the terms Hashimoto’s disease and HT increasingly appeared in textbooks.15 Since the discovery that Hashimoto’s disease is an autoimmune disorder, autoimmune abnormalities have been found in many other diseases. Today, a large number of diseases have been discovered to be autoimmune disorders and several thyroid-specific autoantibodies have been identified. Antibodies against thyroid peroxidase (TPOAb) are present in 10% of women in the general population.16 Painless thyroiditis and postpartum thyroiditis frequently develop in patients with HT.17,18

Hashimoto’s thyroiditis is an organ-specific AITD characterized by diffuse goiter with lymphocytic infiltration and the presence of thyroid-specific autoantibodies. Today, it is one of the most widespread thyroid disorders and a cause of hypothyroidism in areas of the world where dietary iodine is sufficient. The incidence is 0.3–1.5 cases per 1000 population per year. The prevalence of positive antibody tests in women is greater than 10% and of clinical disease at least 2%.19 Men have one tenth of this prevalence.

Although the exact etiology is not as yet known, HT is thought to arise from an interaction between genetic susceptibility factors, epigenetic effects and various environmental triggers (e.g. iodine, infection).20

Twin studies showed epidemiological evidence for genetic susceptibility to HT. The concordance rate for monozygotic twins was 55% vs. 0% for dizygotic twins in HT.21 The concordance rates for thyroid autoantibodies were also higher in monozygotic twins than in dizygotic twins (80% vs. 40%). To date, several loci have been associated with Hashimoto’s disease, such as HLA-DR, immune-regulatory genes (CD40, CTLA-4, PTPN22, FOXP3 and CD25) and thyroid-specific genes (thyroglobulin and thyroid-stimulating hormone [TSH] receptor). HLA-DRb1 Tyr26, Gln70, Lys71 and Arg74 may cause structural changes in pocket 4 and therefore influence binding of certain thyroid-derived pathogenic peptides.22 Tyr30 may also cause structural changes in pocket 6. These structural changes can affect the selectivity and binding of pathogenic peptides to these pockets, influencing the risk of Hashimoto’s disease. A -1623 A/G single-nucleotide polymorphism at thyroglobulin (Tg) promoter (rs180195) defines a cis-regulatory element that may influence binding of nuclear transcription factors such as interferon regulatory factor-1 protein. Increased production of interferon (IFN)g in viral infection may increase expression of Tg and lead to activation of T-cell responses in genetically susceptible individuals.23 A C/T polymorphism in the Kozak sequence of the cluster of differentiation (CD) 40 gene has significant effects on CD40 on antigen-presenting cells, including B cells, and therefore influences B cell proliferation, immunoglobulin class switching, antibody secretion and generation of memory cells.24 Cytotoxic T lymphocyte-associated antigen-4 (CTLA4) and protein tyrosine phosphatase-22 (PTPN22) are major negative regulators of T cell-mediated immune functions. Polymorphisms of the CTLA4 and PTPN22 genes and Hashimoto’s thyroiditis are linked.25 However, the mechanisms by which they confer susceptibility to thyroid autoimmunity are unknown. In the TSH receptor-immunized murine model of Graves’ disease, regulatory T cells (Treg) depletion induces thyroid lymphocytic infiltration with transient or permanent hypothyroidism.26 This suggests that Tregs play a role in the natural progression of hyperthyroid Graves’ disease to Hashimoto’s disease and hypothyroidism in humans.27 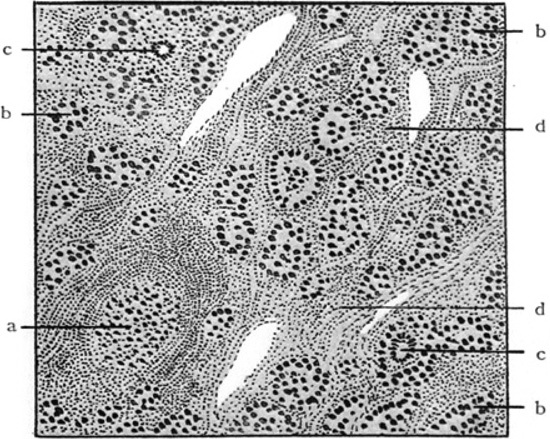 Even with identical twins the concordance rate was only about 50%, emphasizing that other important factors such as environmental factors play roles in the pathogenesis of HT. In genetically susceptible individuals, the environmental factors, such as infection, dietary factors (iodine), stress and pregnancy, may initiate autoimmunity in the thyroid.

Although excess intake of iodine directly blocks hormone synthesis or is directly toxic to thyrocytes, iodine can induce autoimmunity in the thyroid by increasing the immunogenicity of thyroglobulin molecules and/or releasing free oxygen radicals via the enzymatic reaction of thyroid peroxidase. The increased free radicals induce an elevated expression of intracellular adhesion molecule-1.28 However, the precise mechanism for iodine’s induction of autoimmunity in the thyroid is not fully elucidated.

The other environmental factors, such as smoking, hepatitis C virus infection or selenium deficiency, may increase the autoimmune reaction and subsequent inflammation in the thyroid.29, 30 More recently, it has been proposed that viral infection and innate receptors may play a role in the etiology of HT.31 However, the precise mechanisms of the development of HT or their roles in the pathogenesis of HT have not been fully elucidated. Future studies are required to study the molecular basis of the interaction between environmental factors and susceptibility genes.

The thyroid gland is pale and rubbery to firm. The characteristic histopathologic changes of HT include diffuse lymphoplasmacytic infiltration, lymphoid follicle formation with germinal centers, a varying degree of fibrosis, parenchymal atrophy and the presence of large follicular cells with abundant granular eosinophilic cytoplasm, so-called Hürthle, oxyphilic or Askanazy cells (Figure 2).19 Foreign body giant cells and granulomas are not features of HT. Electromicroscopy shows deposits of immunoglobulin (Ig) G and Tg along the basement membranes of follicular cells. Both B and T cells infiltrate the thyroid. Most infiltrating T cells have alpha/beta T cell receptors. Increased expression of Th1-related cytokines such as IFNg, interleukin-2 and CD25 reportedly occurs in intrathyroidal T cells from patients with HT. The impairment of hormone synthesis is due to apoptotic destruction of thyroid cells.32 Increased expression of Fas on thyroid follicular cells by the surrounding cytokines and Fas ligands on T cells may induce this apoptosis, although other cell death pathways, such as complement-fixing cytotoxicity and thyroglobulin-specific T cell-mediated cytotoxicity, may also be involved.33

About 10-13% of all patients with HT exhibit this subtype. The normal thyroid parenchyma is destroyed and extensively replaced by cellular fibrous tissue and collagenous stroma. The fibrosis does not extend beyond the thyroid capsule. Clinically, a very firm goiter with a history of recent enlargement, marked hypothyroidism and a marked increase in anti-thyroglobulin antibody titer are characteristic of this variant. This condition can be mistakenly diagnosed as malignancy.

The gland is very small (1 to 6 g) and is characterized by abundant fibrous tissue, parenchymal atrophy and lymphoplasmacytic infiltration.32,33 This variant is clinically associated with myxedema and a high incidence of Tg Abs. In the blocking type of anti-TSH, receptor, antibodies are present in the sera of 10% of patients with atrophic thyroiditis.42

Bernhard Riedel first recognized this disorder in 1896; he described two patients with hard goiters and tracheal compressive symptoms.9 Later, some experts suggested that RT is not a primary thyroid disease but rather a manifestation of the systemic disorder, multifocal fibrosclerosis.37 The inclusion of Riedel’s thyroiditis among autoimmune thyroid disorders is still debated. One third of RT cases have associated clinical findings of multifocal fibrosclerosis at the time of diagnosis. The incidence of RT was 0.06% in a series of 57,000 thyroidectomies at the Mayo Clinic.38 The histological criteria are as follows: (I) a fibro-inflammatory process involving all or a portion of the thyroid gland; (ii) fibrous extension beyond the thyroid capsule into adjacent anatomic structures; (iii) infiltrates of inflammatory cells without giant cells, lymphoid follicles, oncocytes or granulomas; (iv) evidence of occlusive phlebitis; and (v) absence of neoplasia.

Immunoglobulin G4 related disease (IgG4-RD) is now widely recognized as a multi-organ system disease characterized by tumefactive enlargement of affected organs and increased serum and tissue concentrations of IgG4.39 Very recently a unique subtype of HT, termed ‘IgG4 thyroiditis’, has been proposed.40 It is characterized by lymphoplasmacytic infiltration, fibrosis, increased IgG4-positive plasma cells in the thyroid and high serum IgG4 concentrations. More than 20 IgG4-positive plasma cells/high power field (HPF) and a ratio of >30% IgG4 positive/IgG positive plasma cells have been proposed as diagnostic criteria for IgG4 thyroiditis. IgG4 immunostaining, degree of fibrosis and invasive fibrosis beyond the thyroid capsule may be important aids to making the differential diagnosis. IgG4 thyroiditis is clinically associated with a lower female-to-male ratio, more rapid progression, subclinical hypothyroidism, diffuse low echogenicity and higher concentrations of circulating thyroid autoantibodies compared to those in non-IgG4 thyroiditis. IgG4 thyroiditis is clinically associated with IgG4-RD. Although fibrous variant and Riedel’s thyroiditis may belong to the spectrum of IgG4-RD,39,41 further studies are necessary to clarify this.

3.7. Association of HT with papillary thyroid carcinoma and malignant lymphoma

Although significant progress has been made in our understanding of the contributions of genetic factors and environmental triggers to thyroid autoimmunity, the mechanisms by which gene variants interact with environmental factors to cause thyroid autoimmunity are still unclear. Recent advances in molecular technology will likely provide better understanding of the relationship between genetic factors and environmental factors in HT and new therapeutic approaches to HT. Many organ-specific autoimmune disorders are reportedly associated with HT. The new concept of IgG4 thyroiditis may help clinicians with the diagnosis and management of HT. Future studies on the mechanisms of the association between HT and other autoimmune disorders and/or thyroid malignancy are essential.