Patients with acromegaly have characteristic clinical features caused by soft tissue overgrowth. The most common cause of acromegaly is a growth hormone-secreting adenoma of the anterior pituitary. Both somatic and metabolic features of acromegaly are due to excess growth hormone (GH) secretion and high serum concentrations of insulin-like growth factor-I (IGF-I). Here we present a case of ‘pseudoacromegaly’ with an acromegaloid phenotype, insulin resistance, history of adenomatous colonic polyp, and suppressed IGF-I levels. Patients with this rare condition are likely to have a selective post-receptor defect of insulin signalling, leading to the impairment of metabolic but preservation of mitogenic signalling. Endocrinologists should consider this diagnosis when assessing patients with clinical features of acromegaly and insulin resistance, in the absence of elevated levels of GH and IGF-I.

Acromegaly results from excessive secretion of growth hormone (GH). Excess GH leads to characteristic somatic and metabolic effects. Acromegalic patients present with acral and soft tissue overgrowth and have characteristic facial features. Acromegaly is associated with insulin resistance, impaired glucose tolerance, and overt diabetes. However, an acromegaloid phenotype associated with severe insulin resistance is occasionally seen in the absence of GH excess (‘insulin-mediated pseudoacromegaly’). The aetiology of this condition may be related to a selective post-receptor defect of insulin signaling, affecting the metabolic actions of insulin, but not its mitogenic effects. We herein report a patient with insulin-mediated pseudoacromegaly and review the literature on the presentation and possible pathophysiology of this rare condition.

A 57-year old woman with severe insulin resistance was reviewed in the Endocrine clinic. She had been diagnosed with type 2 diabetes mellitus at age 18. She was initially treated with oral hypoglycaemic agents, metformin, and glibenclamide, and subsequently started on insulin due to poor glycaemic control.

She did not complain of headache or visual disturbance and there was no report of galactorrhoea. Over the years she had noticed an increase in her shoe, glove, and ring size and had undergone decompression surgery for bilateral carpal tunnel syndrome. She had a history of multinodular goitre and had undergone left thyroid lobectomy at age 34. She had an adenomatous polyp removed during a colonoscopy five years previously. Her past medical history included diabetic retinopathy, for which she had received laser treatment. She also had a history of hypertriglyceridaemia, gastro-oesophageal reflux disease, ischaemic heart disease, asthma, and alpha thalassaemia trait.

On physical examination, she had a body mass index of 27 kg/m2, coarse facial features and prominent supraorbital ridges. Her hands were sweaty and enlarged (Figure 1a). Oral examination revealed interdental separation and macroglossia (Figure 1b). Acanthosis nigricans and skin tags were seen on examination of neck and axilla (Figure 1c). Her visual fields were normal to confrontation. Her cardiovascular and respiratory examinations were normal. She had a palpable smooth liver edge which had previously been attributed to non-alcoholic fatty liver disease. Her neurological examination was unremarkable. 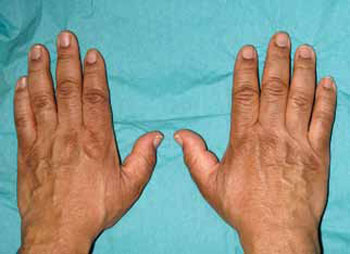 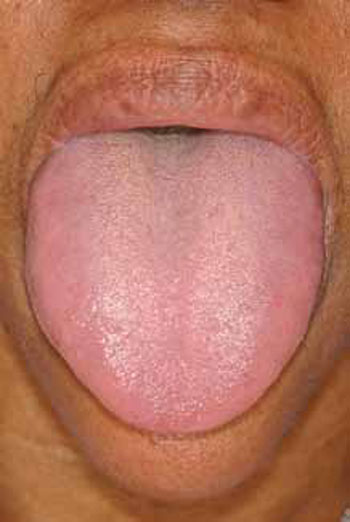 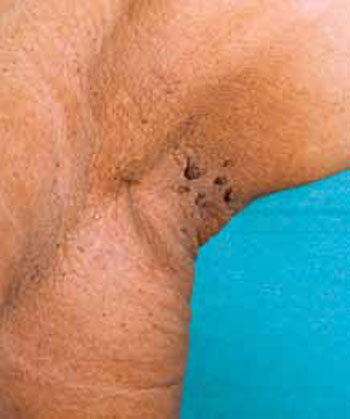 The patient’s clinical signs were consistent with a diagnosis of acromegaly. However, her serum GH and IGF-I levels were suppressed (GH: 0.25 µg/L, IGF-I <5.0 nmol/L [<38.46 ng/mL]). In addition, GH levels were suppressed to <0.6 µg/L during several 75 g oral glucose tolerance tests (OGTT). Her pituitary function tests including serum prolactin, LH, FSH, TSH, free T4, and cortisol at 9:00 were normal. Her cortisol level 60 minutes after tetracosactide stimulation was 747 nmol/L [27.075 µg/dL]. Her pituitary MRI showed a slightly enlarged homogenous pituitary gland with no focal abnormality. Her clinical presentation and biochemical results were consistent with a diagnosis of insulin-mediated pseudoacromegaly.

The somatic and metabolic features of acromegaly are the result of excess GH secretion. GH stimulates hepatic synthesis and secretion of IGF-I. Random serum GH is not a reliable test for diagnosis of acromegaly due to the pulsatile nature of GH secretion. The best screening test for acromegaly is measurement of serum IGF-I. However, acromegalic patients presenting with uncontrolled diabetes may have non-alcoholic fatty liver disease giving falsely low IGF-I levels.1 The OGTT is the most specific dynamic test for establishing the diagnosis of acromegaly. It has been proposed that if both the GH value is less than 0.3 µg/L and the IGF-I is normal, then acromegaly may be excluded.2

Patients with ‘insulin-mediated pseudoacromegaly’ have an acromegaloid phenotype without excessive GH secretion. The abnormal tissue growth seen in these patients has been attributed to the high circulating concentrations of insulin.3

The first case of insulin-mediated pseudoacromegaly was reported in 1993 by Flier et al.11 Since the original case report, at least 7 more patients with similar clinical and biochemical features have been reported in the literature.3,12-15 The clinical and biochemical features described in the literature are summarized in Table 1 . Cultured dermal fibroblasts from patients with this condition have been used to study the underlying molecular defect. Flier and colleagues studied cultured skin fibroblasts from a young female patient with marked hyperinsulinaemia and acromegaloid features in the absence of excess GH or IGF-I.11 Binding of insulin and IGF-I to the respective receptors and autophosphorylation of these receptors following stimulation were normal. However, the ability of insulin and IGF-I to stimulate glucose uptake was impaired. In contrast, the ability of insulin and IGF-I to stimulate amino acid uptake was normal. The discordant signalling defect through both insulin and IGF-I receptors was not secondary to altered expression or primary structure of the insulin receptor or the GLUT4 glucose transporter. They concluded that the responsible molecular defect in this patient involved a signalling intermediate required for regulation of glucose transport, and/or an effector mechanism operative in this process. An explanation confined to the transport or metabolism of glucose may not easily explain the insulin resistance with respect to lipid and lipoprotein metabolism reported in this condition.12 Kumar et al reported evidence of resistance to the action of insulin in adipose tissue both on intracellular lipolysis, involving hormone-sensitive triglyceride lipase, and on endothelial lipoprotein lipase activity.12 Severe hypertriglyceridaemia in this case was therefore attributed to both increased production and reduced clearance of triglyceride-rich lipoproteins from the circulation. Our patient also had a history of hypertriglyceridaemia and was treated with fenofibrate.

The differential diagnosis of patients with acromegaloid features in the absence of GH excess (Table 2 ) also includes pachydermoperiostosis and a number of rare genetic syndromes described in some kindreds.21-26 A case of pseudoacromegaly in a patient receiving an unusually high dose of minoxidil for a long period has been reported in the literature.27

Unlike insulin-mediated pseudoacromegaly, there is no insulin resistance in pachydermoperiostosis and the other syndromes associated with acromegaloidism.28 The characteristic findings of pachydermoperiostosis include thickening of the periosteum (skull or the long bones) or the skin, acrolysis, and alopecia.29-31 The rare genetic syndromes associated with acromegaloid features are almost always associated with abnormalities of the skin, the mucosa, and its appendages, e.g. cutis verticis gyrata (longitudinal folds and furrows in the scalp), keratitis, thickened mucosa, and hypertrichosis.21-23,25,26 The underlying cause of these rare syndromes remains unknown. A pericentric inversion of chromosome 11 segregating with acromegaloid features has been reported in one family.28 In most patients with non-pachydermoperiostosis acromegaloid syndromes, the features of acromegaly are confined to the face.28

Adenomatous polyps are neoplastic polyps. Most cases of colorectal cancer are thought to arise from dysplastic adenomatous polyps. IGF-I and insulin are important mitogens both in vitro and in vivo. Insulin plays an important role in growth regulation through both its interactions with IGF-I and IGF-II and their receptors and through anabolic effects on protein and lipid metabolism. There is increasing evidence that insulin contributes to the development of several cancers. Insulin is an important growth factor for colonic mucosal cells and can stimulate colonic tumour cell proliferation.37-39 Epidemiological studies have shown an association between colorectal cancer and hyperinsulinaemia.40,41 Several models have been suggested for the role of insulin in colorectal carcinogenesis, including insulin-mediated changes in serum IGF-binding protein levels causing increased IGF-I bioavailability.42,43

In addition to its effects on cancer cell growth, hyperinsulinaemia may also stimulate the proliferation and migration of vascular smooth muscle cells via activation of the MAP kinase pathway.44 This can lead to deleterious vascular effects.

In summary, the pathological tissue growth in patients with insulin-mediated pseudoacromegaly may be explained by a selective post-receptor defect in insulin signalling. The extreme hyperinsulinaemia occurring in compensation for the impaired metabolic signalling is likely to activate intact mitogenic signalling pathways and stimulate pathological tissue growth. Endocrinologists should consider this diagnosis when assessing patients with clinical features of acromegaly and insulin resistance in the absence of excess GH and IGF-I levels.