OBJECTIVE: As we previously demonstrated, the inhibitory effect of iodine on thyroid cell growth is mediated by iodolactones, especially 6-iodo-5-hydroxy-eicosatrienoic acid (δ-iodolactone). In this communication we compare the effect of iodide, molecular iodine and δ-iodolactone on growth inhibition and apoptosis on three human thyroid carcinoma cell lines (B-CPAP cells, FTC-133 cells and 8505C cells) as well as on human breast cancer cells (MCF 7). METHODS: Thyroid carcinoma cells were cultured in Dulbecco’s modified Eagle’s medium (DMEM) and MCF 7 cells in Rowswell Park Memorial Institute (RPMI) culture medium, both containing 10% (v/v) Fetal Calf Serum (FCS), until they were confluent. Around 2000 cells were then distributed in 12-well plates and grown for 48 h in either DMEM (thyroid cancer cells) or in RPMI medium (MCF 7 cells) both containing 5% FCS. Thereafter, different concentrations of iodide, iodine or δ-iodolactone were added for 24 h. Growth rate was estimated by cell counting in a Coulter Counter adapted for epithelial cells. Apoptosis was determined by a mitochondrial potential assay. RESULTS: The growth rate of B-CPAP cells was unaffected by iodide, but was reduced by high concentreations of molecular iodine (100 and 500 μM). However, δ-iodolactone significantly reduced cell proliferation already with low concentrations (5 μM and 10 μM) and further in a dose-dependent manner up to 82%. FTC-133 and 8505C cells were unaffected by iodide, iodine or δ-iodolactone. In contrast, in MCF 7 cells, molecular iodine (100 μM) inhibited growth from 100% to 83% but δ-iodolactone (1, 5 and 10 μM) dose-dependently decreased growth rate from 100% to 82% and 62%, respectively. The inhibition of growth was through apoptosis, and not necrosis, as the amount of apoptotic cells corresponded to the growth inhibition. CONCLUSION: δ-Ιodolactone seems to be the main iodocompound which can inhibit growth and induce apoptosis in B-CPAP cells as well as in MCF 7 breast cancer cells.

Although iodocompounds other than thyroid hormones were detected in thyroid homogenates, and iodolipids have been detected after radioiodine incorporation studies since the early fifties,1 their physiological role was unknown. It was hypothesized, however, that these substances are involved in thyroid autoregulation.2

Specific compounds were identified when new, highly sensitive methods, such as gas Chromatography-Mass Spectrometry (GC-MS), were used.3 The in-vitro synthesis of β-iodolactone by incubating arachidonic acid with lactoperoxidase and H2O2 was first described by Boeynam in rat thyroid slices.4 The main product of the conversion of arachidonic acid was identified as 6-iodo-5-hydroxy-8,11,14-eicosatrienoic acid β-lactone (Figure 1) and was later identified by ex vivo studies in porcine thyroid follicles as well as by in vivo experiments in human thyroid tissue derived from patients treated with high doses of iodine before surgery.3,5 δ-Ιodolactone can be purified by silica gel chromatography and characterized by GC-MS spectroscopy.3 The effect of β-iodolactone has been further investigated in isolated porcine thyroid follicles ex vivo. δ-Iodolactone has no effect on cAMP formation in porcine thyroid follicles and seems to be exclusively involved in cAMP-independent growth control. It was shown that β-iodolactone inhibited Epidermal Growth Factor (EGF)-induced proliferation of isolated porcine follicles dose-dependently, comparably to iodide but at about 50-fold lower concentrations.5 Also, in FRTL-5 cells β-iodolactone inhibits thyroid cells proliferation.7 δ-Ιodolactone inhibits inositol-1,4,5-triphosphate (IP3) formation induced by EGF but not by TSH induced IP3 formation. Therefore, β-iodolactone has been postulated to act as a specific inhibitory mediator of iodide on growth factor-induced thyroid cell proliferation.8

During goitrogenesis, endothelial growth precedes the proliferation of thyroid cells. Thyroid follicles ex vivo also produce a Paracrine Endothelial Growth Factor (FGF1) which stimulates fibrobast and endothelial growth. This is inhibited by both iodide and β-iodolactone.10 These findings explain the inhibitory effect of iodide on goitrogenesis, which obviously is also mediated by β-iodolactone. The expression of Transforming Growth Factor beta 1 (TGFβ1) mRNA is unaffected by iodide and β-iodolactone, indicating that TGFβ1 is not involved in the inhibitory effect of iodine or β-iodolactone on thyroid cell growth.11

We have also shown that both iodide and β-iodolactone induce apoptosis, demonstrated by electron microscopy in porcine thyroid follicles ex vivo in a three-dimensional tissue culture.12 Apoptosis was already induced by 0.05 µM of β-iodolactone, whereas 20 µM of iodide were necessary to obtain a comparable effect. The effect of iodide was inhibited by methimazole in contrast to β-iodolactone, indicating that peroxidase activity is necessary for the action of iodide on growth and apoptosis.

Dulbecco’s modified Eagle’s medium (DMEM), RPMI-1640, Hank’s balanced salt solution, fetal bovine serum (FBS), streptomycin, penicillin, amphothericin B and trysin-EDTA were obtained by GIBCO-BRL/ invitrogen (Karlsruhe, Germany); soybean trypsin inhibitor was purchased from Calbiochem (La Jolla, USA); potassium iodide and H2O2 were from Merck (Darmstadt, Germany); the Mitochondrial Potential Assay was from R&D Systems (Minneapolis, USA), and all other chemicals were from SIGMA Chemicals Co. Human breast cancer cells were from ATCC HTP-22, while human malignant thyroid cells (B-CPAP cells derived from papillary thyroid carcinoma, FTC-133 derived from follicular thyroid carcinoma and 8505C derived from anaplastic thyroid carcinoma) were kindly provided by Dr. Huang-Vu, University of Halle, Germany. The thyroid carcinoma cells were grown in DMEM with 10% (v/v) FBS, 100 U/ml penicillin, 100 µg/ml streptomycin and 0.5 µg/ml amphothericin B. MCF 7 cells were cultured in RPMI containing 10% (v/v) FCS and antibiotics until they were confluent. Then around 2000 cells were distributed in 12-well plates and grown for 48 h in RPMI containing 5% FCS. Thereafter, different concentrations of iodide, iodine (Lugol’s solution: I2 + I-→ I3-+ I2 → I5-) or β-iodolactone were added for another 24 h. Cells were counted in a Coulter-Counter adapted to the different cell sizes.

δ-Ιodolactone (6-iodo-5-hydroxy-8,11,14-eicosatrienoic acid) was synthesized by lactoperoxidase catalyzed iodination of arachidonic acid and purified by reverse-phase HPLC according to the methods described earlier.3

The mitochondrial potential assay from R&D Systems was used for the detection of apoptosis as recently described.13 The follicles were stained in the well using DePsipher (5, 5’6, 6’-tetrachloro-1, 1’, 3, 3’-tetraethylbenzimidazolyl carbocyanine iodide), a mitochondrial activity marker. The substance accumulates in the intact mitochondrium in the form of aggregates, displaying a bright red signal under a fluorescein filter (495 nm). After the breakdown of the mitochondrial membrane potential that occurs in the early phase of apoptosis, the dye remains in the cytosol as a monomer, causing a green fluorescence.

The cells were counted independently by two experienced technicians. At least 500 thyroid follicular cells of each well were evaluated by each technician and the results were expressed as mean. As a positive control, apoptosis was induced in HL-60 cells with etoposide.13

Each experiment with six parallel samples was carried out at least four times independently. The rate of apoptosis was expressed as percentage. Consequently, the samples were regarded as dependent and differences were calculated by Wilcoxon anlysis for paired samples. Statistical calculation was performed with the commercial SPSS program.

Neither iodide, Lugol’s solution (mainly iodine) (100 µM) nor β-iodolactone (5 and 10 µM) had any effect on cell growth of 8505C cells derived from anaplastic thyroid tissue, nor on FTC-133 cells derived from a metastasis of a follicular carcinoma (data not shown).

In contrast, growth of B-CPAP cells derived from papillary thyroid carcinoma significantly and dose-dependently were inhibited by β-iodolactone (9.3% with 5 µM, p = 0.04, 17.4% with 10 µM, p=0.006) (Figure 2). Whereas iodide, even in high concentrations up to 500 µM, had no effect on the growth of B-CPAP cells, 100 µM and 500 µM of iodine significantly inhibited cell proliferation (Figure 3).

Whereas the role of iodide and β-iodolactone on growth inhibition and induction of apoptosis in normal thyroid follicular cells is well established,8,12 no data are currently available for human thyroid carcinoma cells. Iodide as well as iodine had no effect on growth of carcinoma cells derived from anaplastic and follicular carcinoma. However, there was a mild, but significant, inhibition in the proliferation of papillary thyroid carcinoma cells (B-CPAP) with high doses of iodine. With regard to β-iodolactone, effectiveness was demonstrated already in low concentratons. This finding is in contrast to human breast cancer cells (MCF 7), which respond to iodine, as well as to β-iodolactone with growth inhibition and induction of apoptosis. Apoptosis seems to be the main mechanism of growth inhibition, as the number of apoptotic cells corresponds to the degree of growth inhibition. This has already been demonstrated in normal porcine thyroid follicles ex vivo.12 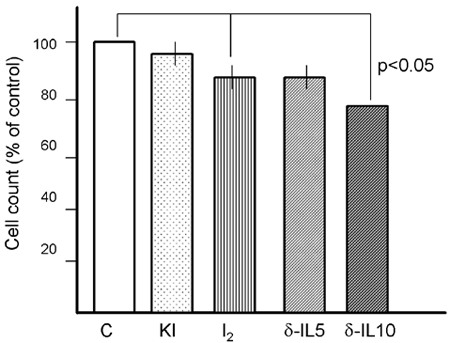 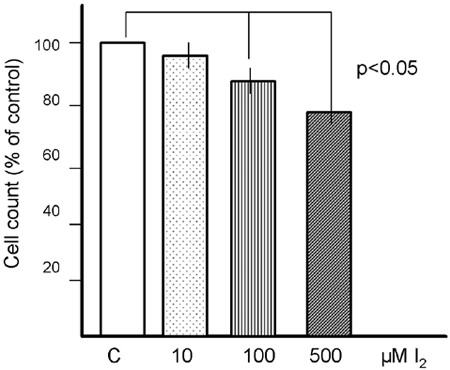 The MCF-7 cells express NIS only after incubation with all-trans Retinoic Acid (RA) or dexamethasone.14 In our experiments, NIS was not induced by RA and there was no uptake of iodide (data not shown). Recently, however, it has been shown that MCF-7 cells are able to bind molecular iodine in a saturable manner.14 It is suggested that iodine in the presence of peroxidases within or at the cell membrane might generate β-iodolactones, which then exert their inhibitory activity.15 Interstingly, molecular iodine, but not iodide, inhibits chemically induced mammary carcinogenesis in animals.16 It can be concluded from our experiments that β-iodolactone is the main component generated during iodine exposure of cells expressing peroxidases, which then inhibits growth and induces apoptosis.

Figure 5. Dose-dependent effect of 1, 5 and 10 µM of δ-iodolactone (δ-IL) on growth of MCF-7 mammary carcinoma cells. Cells were incubated for 24 hours and then cell number counted in a Coulter Counter. Reduction of cell number was already significant with 1 µM δ-iodolactone (p<0.05) and dose-dependently with higher concntrations (p<0.01), in comparison to controls (C).

We had demonstrated earlier that β-iodolactone inhibits IP3 generation but not cAMP formation in porcine thyroid follicles ex vivo and suggested that the inhibition of the protein kinase C pathway might be responsible for the growth inhibition.6 Iodine as well as β-iodolactone also seems to induce apoptosis, and this might be the most important activity of iodine and β-iodolactone, whereas β-iodolactone seems to be the main active component.12 It has also been shown that molecular iodine induces caspase-independent apoptosis in human breast carcinoma cells, involving the mitochondria-mediated pathway.21 These experiments need to be done with β-iodolactone for comparison.

The fact that thyroid carcinoma cells do not respond to molecular iodine might be due to a lack of peroxidases (TPO) even in differentiated thyroid carcinomas.17 Rediffentiation studies would be necessary either with RA or rosiglitazone.18-20 These rediffentiation experiments as well as chronic treatment with high doses of molecular iodine might prove to be a promising new approach in the management of patients with differentiated thyroid carcinomas, (not trapping iodide) as well as of patients with breast cancer.

In conclusion, based on current findings we postulate that iodide can generate β-iodolactone only in cells expressing NIS and peroxidases, whereas molecular iodine can be generated within the cell membrane in the presence of peroxidases alone and without the need for NIS. β-Iodolactone is the main compound that inhibits cell proliferation and induces apoptosis in differentiated thyroid carcinoma cells as well as in breast cancer cells.