The patient was a 70-year-old man with a recurrent pituitary tumor. Three surgeries were performed but the tumor recurred. Based on histologic, immunohistochemical and ultrastructural studies, the diagnosis of oncocytic gonadotrophic pituitary adenoma was made. The tumor was a macroadenoma partly immunopositive for LH. Immunohistochemistry for O6 Methylguanine-DNA Methyl-Transferase (MGMT) showed an admixture of immunopositive and immunonegative cells. After recurrence following operations, the patient was treated with Temozolomide, an imidazotetrazine derivative, DNA-alkylating drug. Following Temozolomide administration the MRI demonstrated significant tumor necrosis. A few months later, the patient died of massive pulmonary embolism. No autopsy was performed. The present case indicates that benign, typically slow-growing pituitary adenomas of oncocytic gonadotrophic type may respond to Temozolomide even when the tumor consists of an admixture of MGMT immunopositive and immunonegative cells.

Temozolomide is an imidazotetrazine derivative, which methylates DNA at the O6 position of guanine, this forming the basis of its utility in the treatment of gliomas and various neuroendocrine tumors.1-4 Recent reports indicate that Temozolomide is efficacious in the therapy of aggressive tumors, including prolactinomas, ACTH-producing adenomas, clinically aggressive adenomas and functioning pituitary carcinomas.5-11 Herein, we report the favourable effect of Temozolomide in a patient with a large, aggressively growing, albeit benign pituitary adenoma of oncocytic gonadotrophic type. To our knowledge, the effect of Temozolomide on such pituitary adenomas has not yet been investigated in detail.

The patient, a 70-year-old man, had undergone three surgeries for pituitary tumor. The first one in 1989 was followed by radiotherapy. Thereafter, he developed hypopituitarism confirmed by decreased blood hormone levels. Twice thereafter, the tumor recurred, necessitating re-operation in 1999 and 2005. The resected tumor was investigated by histology, immunohistochemistry and transmission electron microscopy. Details of the methods have been described previously.12

In 2007, the patient complained of visual disturbance. Magnetic resonance imaging (MRI) showed regrowth of the tumor (3 cm x 3 cm) with sellar expansion, and both suprasellar extension as well as chiasmal compression (Figures 3A). Temozolomide therapy was begun (200 mg/day, orally for 5 days every 28 days). After five cycles, MRI disclosed significant changes with a minor reduction in tumor volume and an area of intratumoral necrosis (Figure 3B). One month later, the patient developed severe diarrhea and dehydration, followed by sudden cardiopulmonary collapse. A diagnosis of massive pulmonary embolism was made. The patient died and no autopsy was performed. 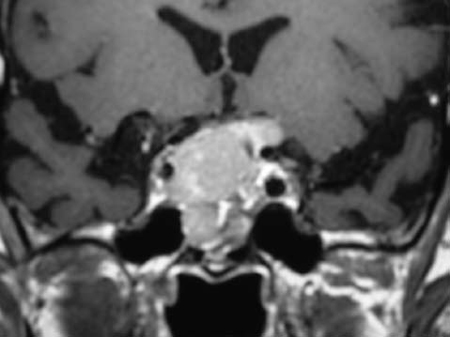 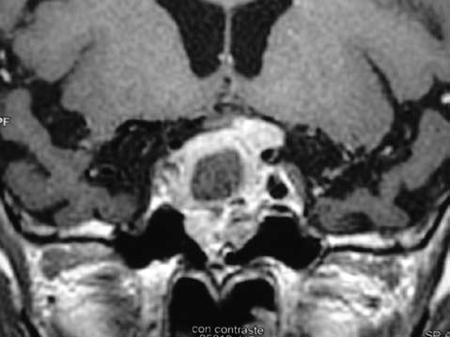 Oncocytic tumors are characterized by their cytoplasmic abundance of mitochondria. They arise in several organs. Of those occurring in the pituitary, most consist of adenohypophysial cells and occur in older patients. As a rule, they are slow-growing benign adenomas, mostly macroadenomas, which displace and to a lesser extent invade surrounding tissues.13,14

In our patient, MRI imaging showed tumor necrosis indicating responsiveness to Temozolomide therapy. MGMT is a DNA repair enzyme which removes alkyl adducts from DNA and counteracts the effects of Temozolomide upon tumor cells.15-21 Pituitary tumors which are MGMT immunonegative respond to treatment, whereas those that are MGMT immunopositive show no treatment response.17 Thus, immunohistochemical study of MGMT may predict responsiveness of the tumor cells to Temozolomide. In our case, groups of tumor cells were MGMT immunopositive, whereas others were immunonegative. It is noteworthy that many pituitary tumors diagnosed as null cell adenoma or gonadotrophic adenoma, either of which may be oncocytic, display variable degrees of differentiation in different areas of the same tumor resulting in variation, both in terms of morphology as well as in MGMT immunoreactivity and potential therapeutic responsiveness.14 Pituitary tumors composed of both MGMT immunopositive and immunonegative cells have also been reported by Widhalm et al.11 Despite variation in MGMT expression in the present tumor, MRI indicated a certain degree of response. At present, the question of whether only the MGMT immunonegative cells responded and whether immunopositive cells were also affected by Temozolomide cannot be answered.

The authors wish to thank the Jarislowsky and the Carr-Lloyd Harris Foundations as well as Mr. Jesus Rodriguez for their generous support.