Acromegaly is caused by excessive growth hormone secretion, usually from a pituitary adenoma. The use of somatostatin analogues as primary or adjunctive therapy has been widely applied in the management of acromegaly. We are aware of only three reported cases of complete shrinkage of a pituitary adenoma after long-term analogue administration. However in these cases, the reduction in the dimension of the adenoma was obtained with the everyday use of somatostatin analogues and not with the newer longer acting formulations. We report a patient in whom long term (62 months) lanreotide-L.A.R administration resulted in complete disappearance of a growth hormone secreting pituitary macroadenoma, followed by recurrence of the adenoma six months post therapy discontinuation.

Acromegaly is caused by excessive growth hormone (GH) secretion from a pituitary adenoma. Clinical manifestations include excessive growth of soft tissue, cartilage, and bone, leading to facial disfigurement and enlargement of the hands and feet. Moreover, there are adverse effects on the cardiovascular system and carbohydrate metabolism leading to a 2–4-fold higher mortality rate than that of the general population in patients with active disease.1

Despite the fact that somatostatin analogues do not provide a specific therapy, their application is very helpful in controlling symptoms and signs of the disease. In the majority of patients (60%), the administration of somatostatin analogues decreases GH levels, improves metabolic profile, and reduces tumour volume, thus facilitating surgical approach.2 However, there is no close correlation between GH suppression and the shrinkage of GH secreting adenoma and, therefore, surgical intervention remains the gold standard for the treatment of acromegaly. The success rate of surgery is directly related to the size of the adenoma (90% for adenomas <10mm and 50% for adenomas >10mm).3 As the size of the pituitary mass is critical for the outcome of the surgical approach, in cases where urgent surgical intervention is not obligatory (e.g. optic chiasm compression), short-term administration of somatostatin analogues constitutes common practice, aiming at reduction of tumour volume and amelioration of metabolic disturbances.4-6

In this report, we describe a patient in whom long term (62 months) lanreotide-L.A.R administration resulted in complete disappearance of a GH secreting macroadenoma, followed by recurrence of the adenoma six months post therapy discontinuation.

A 55-year old woman presented at the 2nd Department of Internal Medicine, "Attikon" University Hospital, with a history of acromegaly. Sixty eight months previously she visited her doctor due to menopausal symptoms. She did not complain of visual defects or headaches, but facial characteristics (prognathism and macroglossia) led to the suspicion of acromegaly. The diagnosis was confirmed by pertinent studies (GH: 8.5µg/L, IGF1: 650µg/L) and brain MRI revealed pituitary macroadenoma (17x19x14 mm, volume: 2.4cm3). At this point, she was placed on therapy with somatostatin analogue (lanreotide-L.A.R., 30mg every 15 days), substitution therapy with thyroxine (100µg daily), and hydrocortisone (30 mg daily). No other drugs were administered.
The patient experienced clinical and biochemical improvement after 12 months of therapy and a follow-up MRI revealed significant shrinkage of the adenoma (5x8x6mm, volume: 0.12cm3). The next MRI, performed 4 months later, revealed that the adenoma had completely disappeared and the same picture was observed after 62 months of therapy, when the patient decided to discontinue treatment. She did not complain of any side effects to the drug, but reported feeling “tired” from the injection. She did, however, continue to take thyroxine and hydrocortisone replacement therapy.

Six months after lanreotide-L.A.R discontinuation and 68 months after the initial diagnosis, the patient presented at our clinic because she had experienced a decline in physical strength. A detailed investigation revealed active disease and the reappearance of the adenoma (4x5x4.5mm, volume: 0.5cm3). Further assessment of the patient disclosed impaired glucose tolerance (glucose level: 146 mg/dl, 2 hours post 75g of glucose), mild diastolic dysfunction of the heart (EF: 44%) mild ventricular hypertrophy, and mild atherosclerotic plaques at the carotid arteries and the lower leg arteries. Ultrasound of the abdomen and colonoscopy were normal, whereas polysomnography study revealed mild sleep apnea (six episodes of apnea-hypopnea per hour of sleep). CT scan of the chest and abdomen were negative. Full body scan with radiolabelled octreotide was negative. The absence of a positive signal on octreoscan and the negative CT results of the chest and abdomen appear to rule out ectopic GHRH secretion. The long-term evolution of the adenoma as well as peak GH values post Oral Glucose Tolerance Test (OGTT) and basal IGF1 values are depicted in Figure 1. GH response post OGTT during the course of the disease is depicted in Figure 2. 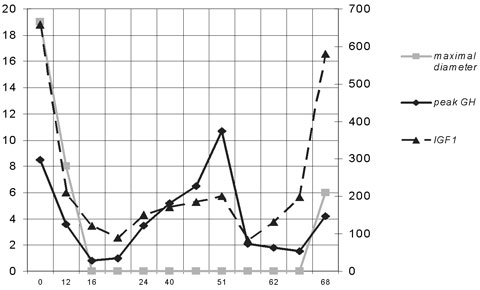 Figure 1. Fluctuations of peak GH during OGTT, basal IGF1 values, and maximal diameter of the adenoma throughout the period of observation. 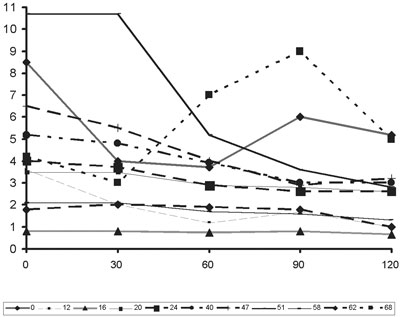 Figure 2. Fluctuations of GH post OGTT stimulation throughout the period of observation.

Coronal MRI scans at diagnosis and at 12, 16, and 68 months after lanreotide-L.A.R treatment initiation are shown in Figure 3 (A, B, C, and D, respectively). Taking into consideration the activity of the disease and the reappearance of the adenoma after the discontinuation of therapy, administration of lanreotide-L.A.R. 60mg was recommended and replacement of thyroxine and hydrocortisone to be continued. 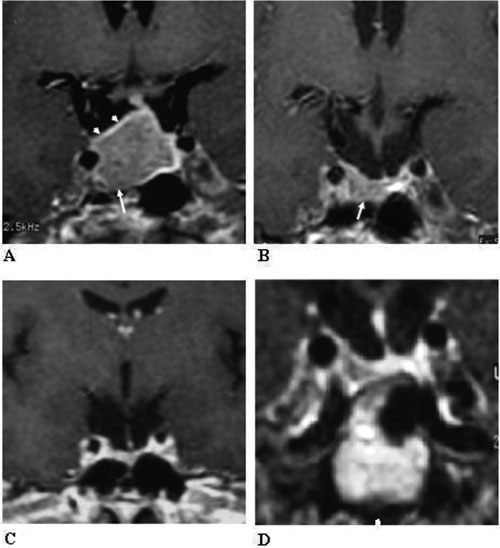 Sagittal and coronal T1 weighted (TR 600/TE 20) MRI scans of the pituitary tumour were obtained both with and without contrast injection (Magnevist, Schering, Berlin, Germany), using a Siemens Magnetom 63 (Siemens, Erlangen, Germany). The scan parameters were 3 mm slices/0.3 mm distance. Magnetic resonance imaging (MRI) scan of the pituitary gland was performed at baseline and at regular intervals. The volume of the adenoma was calculated by the ellissoid formula. The maximal diameter of the pituitary mass during the follow-up period is depicted in Figure 1.

The treatment of acromegaly constitutes a real challenge for the endocrinologist. Improved knowledge of GH physiology, the analysis of retrospective epidemiological data and advances in GH assay have rendered the criteria for diagnosis and cure of acromegaly more stringent. Currently, the criteria for acromegaly cure include the reduction of growth hormone (GH) levels to less than 1ìg/L after oral glucose administration, the restoration of insulin-like growth factor 1 (IGF1) levels to age and gender-normalized levels and adequate control of the signs and symptoms associated with acromegaly (i.e., headache, visual impairment, acral enlargement, and arthralgia).

The goals of therapy are reduction in acromegaly associated mortality and reduction of pituitary adenoma size, whilst preserving other pituitary hormone functions, and alleviation of the effects of the tumour mass on surrounding structures.13,14 In order to meet these therapeutic targets, the use of somatostatin analogues as a primary or adjunctive therapy to surgery or radiotherapy is considered crucial, because with such treatment many of the aforementioned criteria are fulfilled.

The success rate of surgery is approximately 80% for microadenomas and 40% for macroadenomas, with a recurrence rate of about 5%-10%.15 It has been found that tumour size is a useful predictor of surgery outcome.16 Consequently, somatostatin analogue administration is vital in the management of acromegaly, as it helps to alleviate symptoms and simultaneously promotes regression of the adenoma, leading to tumour reduction which finally improves surgery success.

The factors that determine hormone and volume responses of pituitary adenomas to analogues are poorly understood. A significant positive correlation between the fall in GH secretion and the reduction in tumour size22 has been reported, but this finding has not been verified by all groups.23 Some researchers reported a correlation between the distribution of somatostatin receptors in GH secreting pituitary tissue and the in-vivo GH responsiveness to analogues. The best responses occurred in patients whose tumours contained high density, homogeneously distributed receptors, with a high affinity for octreotide.24 However, other groups did not find any association between tumour subtype (sparsely and densely granulated somatotroph adenomas), which may reflect the receptor’s distribution.25

The effectiveness of analogues on tumour regression is controversial and many studies have examined their action and provided conflicting results. Lundin and colleagues described a mean tumour volume reduction of 51%,26 while Newman and colleagues reported tumour reduction of more than 25% in their series.27 More recently, Colao and colleagues showed mean tumour reduction of 53%,28 whereas Plockinger et al reported tumour volume shrinkage of 26-85% in up to 50% of their patients.29 Hence, literature data are consistent with tumour reduction with somatostatin analogues which is related to the magnitude of the initial size of the adenoma and the percentage decrease from baseline GH after the initiation of treatment.30,31 Although 111 indium-pentetreotide scintigraphy has been considered a useful tool to predict tumour response to analogues administration, as it allows visualization of somatostatin receptors, 111 indium-pentetreotide uptake is not correlated with GH response or pituitary mass reduction.29

As far as we are aware, there are three reports in the literature describing complete shrinkage of a GH secreting pituitary adenoma with the use of somatostatin analogues, but in comparison to our case, certain differences can be delineated. In the report by Ducasse et al, “complete shrinkage” has been reported. However, the reduction of pituitary mass from 35x25mm to 15x15mm, after 12 months of therapy with the analogue SMS 201-995,32 does not constitute complete disappearance of the adenoma as in our case. In the case of Sadoul et al, a significant reduction of a giant mixed GH-prolactin secreting adenoma from 11cm3 to 0.5cm3, after 12 months of combined therapy with octreotide acetate and bromocriptine, was observed.33

The case that most resembles our own is the one reported by Bakarat and Melmed,34 who observed complete disappearance of a GH secreting adenoma (from 4.6cm3 to 0) after 4 months of octreotide acetate administration, while the discontinuation of treatment for one month led to an immediate recurrence of the pituitary mass.

A very interesting finding in our patient was the response of GH values during OGTT throughout the period of lanreotide treatment (Figure 2). The response was not normal (peak GH values >1µg/L), despite the complete disappearance of the pituitary mass (Figure 1). The IGF1 values, however, were within the normal range for the patient’s age group. These results suggest residual activity of the disease during somatostatin analogue administration, which is not reflected in the IGF1 values, and in all probability explain the recurrence of the adenoma after the discontinuation of treatment. The absence of pituitary mass on serial MRIs could almost certainly be attributed to technical limitations and, most likely, the response of GH to oral glucose load could be used as an index of possible adenoma recurrence.

To our knowledge, this is the first case in the literature reporting complete disappearance of pituitary GH-secreting adenoma on MRI, during treatment with the newer somatostatin analogues, especially lanreotide-L.A.R with recurrence following therapy discontinuation.