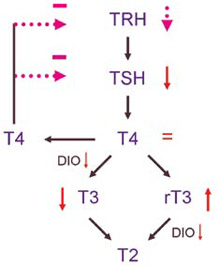 Figure 1. The changes that occur in thyroid function tests with advancing age. There is an age-dependent decline in serum TSH and (free) T3. The reduction in TSH secretion may very well be due to an increased sensitivity of the thyrotrophes to the negative feedback by T4, but other factors such as a reduced hypothalamic TRH secretion cannot be excluded (shown in purple). Although reduced TSH levels result in a reduced thyroidal T4 secretion in the elderly, serum total and free T4 (FT4) concentrations remain unchanged. This is because T4 degradation by outer ring deiodination decreases with age. The inactive metabolite rT3 seems to increase with age.

Serum TSH concentrations decrease in healthy elderly subjects due to an age-related decrease in TSH secretion by the pituitary.6 Furthermore, the nocturnal TSH peak is blunted and there is a 1-1.5 hour shift in the circadian rhythm of TSH secretion, resulting in an earlier peak.7,8 The mechanism of this reduction in TSH secretion is currently unknown. It may very well be an increased sensitivity of the thyrotrophes to the negative feedback by T4, but other mechanisms such as a reduced hypothalamic Thyrotropine Releasing Hormone (TRH) secretion cannot be excluded.1

Although reduced TSH levels result in a reduced thyroidal T4 secretion in the elderly,9,10 serum total and free T4 (FT4) concentrations remain unchanged.1,2 This is because T4 degradation by outer ring deiodination decreases with age.9-11 Outer ring deiodination, catalyzed by the deiodiniases type 1 and type 2 (D1 and D2), is responsible for the conversion of T4 to T3 and for the clearance of the inactive metabolite rT3.12 The net result of this decreased deiodination with advancing age is a clear, age-dependent decline in total and free T3 levels up to 100 years or more, and an increase in serum rT3 levels.1,4 It is currently unknown whether an increased inner ring deiodination by D3, which would result in an increased clearance of T4 and T3 and an increased production of rT3, also contributes to these changes. This has recently been shown to be a major factor in non-thyroidal illness.13,14

There is an age-dependent increase in the prevalence of positive anti-thyroperoxidase (anti-TPO) and anti-thyroglobulin (anti-Tg) antibodies, especially in females over 60 years of age.15-19 This results in an increased prevalence of subclinical hypothyroidism.19,20 An increase in TSH levels in the elderly, as described in some studies,19,21 is therefore thought to be primarily due to the inclusion of women with thyroid antibodies and/or (subclinical) hypothyroidism in those studies.1,2,19,22 Interestingly, thyroid antibodies are rare in centenarians and other highly selected groups of elderly, while they are rather frequently observed in hospitalized or other unselected elderly subjects.1,23,24

Confounders in thyroid function tests in the elderly

Fasting and acute and chronic illness are associated with a decreased serum T3 and increased rT3, without any evidence of thyroid disease.13,25-30 This is often referred to as non-thyroidal illness. The high prevalence of non-thyroidal illness, due to malnutrition and the presence of chronic illness, is an important confounder in the assessment of thyroid function in the elderly.1,3 This is illustrated by a recent study in 403 healthy ambulatory men (aged 73-94 years), in which subjects with systemic infectious, inflammatory, and malignant disorders were excluded. In this study, 63 men met the criteria for non-thyroidal illness,3 which was defined as a low serum T3 and a high serum rT3. Those subjects were older and had more frequently such diseases as hypertension, atherosclerosis, mild congestive heart failure, chronic obstructive pulmonary disease, diabetes and/or arthritis.3 Interestingly, independent of disease, high rT3 was associated with a low performance score. This might be due to nutritional status, since caloric deprivation is known to result in an increase in serum rT3 levels.25,28,31 A reduced selenium intake, in addition to other factors such as iodine intake, seems to be important here, since the trace element selenium is essential for the deiodination of thyroid hormone.12,32,33

SUBCLINICAL THYROID DISEASE IN THE ELDERLY

When compared to younger patients, elderly hyperthyroid patients display fewer signs and symptoms.1,43 They often lack a tremor, heat intolerance, ocular signs, nervousness or tachycardia. However, the frequency of atrial fibrillation is higher. Unexplained weight loss, with diarrhea but also with constipation, nausea, and vomiting may be the dominant picture.1,43 In addition, depression and mania can be manifestations of hyperthyroidism in the elderly.

Administration of 131I, often combined with β-blocking agents, is the treatment of choice in most cases of hyperthyroidism in the elderly.

Approximately 1-2% of patients over 60 years of age with subclinical hyperthyroidism progress to overt hyperthyroidism.45,49 Progression rarely occurs in patients with a serum TSH between 0.1 and 0.45 mU/L,44,45,50 while in a substantial proportion of elderly patients TSH values normalize.49,51,52 Before considering treatment of patients with a suppressed TSH, other causes should be excluded. It should be underlined that non-thyroidal illness and use of TSH suppressing drugs hardly ever result in a TSH level below 0.1 mU/L.13

In addition to progression to overt hyperthyroidism, other possible consequences of subclinical hyperthyroidism would be cardiac dysfunction, atrial fibrillation, other adverse cardiac endpoints, systemic and neuropsychiatric symptoms, and a reduced bone mineral density.44,51-61 Nevertheless, in two recent reviews of the literature it was concluded that evidence regarding the benefit of treatment in patients who are found to have subclinical hyperthyroidism by screening is insufficient or absent, except for bone mineral density.44,62

In patients with a TSH <0.1mU/L due to Graves’ or nodular thyroid disease, the panel recommended the consideration of treatment, especially in subjects older than 60 years.44 Although there is a lack of intervention trials showing beneficial effects (except for the stabilization of bone loss),66,67 the concern about the risk of atrial fibrillation and/or bone loss in the elderly convinced the panel to recommend the consideration of treatment.44

Hypothyroidism in the elderly

The frequency of overt hypothyroidism, which is 5 to 8 times more common in women than men, varies from 0.1 to 2%, with an increased prevalence of up to 5% in subjects over 60 years of age.1,50 Hypothyroidism in the elderly is often atypical and lacks the classic symptoms seen in younger patients.1 This is due to a more insidious onset, the co-existence of several age-associated diseases, and the notion that several signs and symptoms (fatigue, cold intolerance, constipation, congestive heart failure, depression, etc) may be attributed to the process of aging itself. The most frequent cause is autoimmune thyroiditis, followed by prior therapy for previous thyrotoxicosis.1,68

The treatment of hypothyroidism at any age requires thyroid hormone replacement therapy.1 Thyroid hormone increases myocardial oxygen demand, which may induce angina pectoris, myocardial infarction or cardiac arrhythmias in older patients. Therefore, in elderly patients, and even more so in elderly patients with coronary disease or multiple coronary risk factors, thyroid hormone replacement should be initiated conservatively.1,69 One prospective study, in which 50 hypothyroid patients were randomly assigned to a full starting dose of levothyroxine or to levothyroxine 25mcg/day with dose adjustments every four weeks, showed no adverse cardiac effects in those patients who received a full starting dose.70 However, the oldest patient included in the full dose group of this study was 86 years of age and all patients with a known history of cardiac disease or those taking cardiac medication were excluded. In addition, signs and symptoms of hypothyroidism and quality of life improved at a comparable rate in both groups.70

It is generally advised that elderly hypothyroid patients are given a lower dose than younger adults to compensate for the physiological age-associated reduction in T4 production.1,71-74 An interesting observation in older hypothyroid patients is the narrow range between TSH suppression and substitution dose, which may be due to an increased sensitivity of the thyrotrophes to the negative feedback by T4. Close monitoring is nevertheless required to avoid overtreatment.1 An extra justification for giving a lower dose in the very old is the fact that two recent observational studies (in subjects >73 years and in subjects >85 years) have shown that high TSH and/or low FT4 levels are associated with a lower mortality rate.3,65

Subclinical hypothyroidism in the elderly

The natural history of subclinical hypothyroidism in subjects older than 55 years is progression to overt hypothyroidism at a rate of approximately 8% per year. The magnitude of TSH elevation at baseline is the most powerful predictor for progression, but the presence of symptoms of hypothyroidism, goiter, positive thyroid antibodies, and a low normal FT4 also affect the outcome.78 Interestingly, in the same study TSH levels normalized in 37% of patients after an average follow-up of 31.7 months.78 Whether or not subclinical thyroid dysfunction should be treated has been a matter of debate for years. Possible consequences of subclinical hypothyroidism include cardiac dysfunction, atherosclerosis, elevated total and LDL cholesterol, neuropsychiatric symptoms, and progression to overt hypothyroidism.44,50,54,58,76,79 In two recent reviews of the literature, it was concluded that evidence regarding the efficacy of treatment in patients who are found to have subclinical hypothyroidism by screening is inconclusive.44,62 Data relating a serum TSH concentration above 10 mU/L to higher cholesterol levels were rated as fair, but data on the benefits of treatment were rated as insufficient.44 All other associations of symptoms, as well as of benefits of treatment, were rated as insufficient.44,62

Current guidelines therefore do not recommend routine thyroid hormone substitution in subjects with normal FT4 levels and a TSH below 10 mU/L. Thyroid function tests with a 6-12 month interval are recommended to monitor the course of the serum TSH level.2,44 In individual patients with hypothyroid symptoms, a trial of thyroid hormone substitution for several months may be considered. Still, the likelihood of improvement is small and must be balanced against potential risks of therapy.44 In patients with a TSH >10mU/L thyroxine therapy can be considered as reasonable due to the high progression rate to overt hypothyroidism.2,44 This is especially true in women of over 60 years of age who have positive antibodies.78,80 However, in the very old, thyroid hormone substitution is not likely to be beneficial. It may even be harmful, since two recent observational studies (in subjects >73 years and in subjects >85 years) have shown that high TSH and/or low FT4 levels are associated with a lower mortality rate.3,65

In conclusion, aging results in a decrease in serum TSH and T3 levels, whereas serum FT4 levels usually remain unchanged. Nutritional status, illness, and the use of medication are common confounders in the determination of thyroid status in the elderly. Currently available data do not lead to definitive conclusions with regard to the treatment of subclinical thyroid disease in the elderly. In general, it can be concluded that the treatment of pronounced subclinical thyroid disease (TSH <0.1 mU/L or TSH >10 mU/L) should be considered, based on a combination of age, complaints, and risk factors in the individual patients. With respect to mild subclinical thyroid disease (TSH 0.1-0.45 mU/L and TSH 4.5-10 mU/L), the treatment of subclinical hyperthyroidism should be considered in the elderly, whereas subclinical hypothyroidism in the very old may be protective and should therefore not be treated.

The author would like to thank Professor T.J. Visser for critical reading of the manuscript.