Current evidence suggests that insulin resistance contributes to the pathophysiologic features of the polycystic ovary syndrome (PCOS). The observation that insulin resistance is a central feature of PCOS leads to studies of the insulin signaling system in this disorder. This article reviews the possible role of putative insulin mediators, inositolphosphoglycans (IPG) mediators, in PCOS. We will focus on how IPGs mediate (a) hyperandrogenism and (b) insulin sensitivity in this disorder.

INSULIN RESISTANCE AND THE PATHOGENESIS OF PCOS

Insulin resistance, along with its concomitant hyperinsulinemia, is critical in the pathogenesis of hyperandrogenism in PCOS. In vitro evidence shows that in isolated thecal cells from PCOS women, insulin stimulates ovarian testosterone production5. In vivo evidence also supports the role of hyperinsulinemia in the elevated circulating levels of testosterone in PCOS. Suppression of insulin release by diazoxide decreases both serum total and free testosterone levels in women with PCOS. In addition, when insulin-sensitizing agents such as metformin6-8, troglitazone9,10, and more recently, rosiglitazone11,12, are administered to women with PCOS, serum testosterone concentrations decrease together with serum insulin concentrations. Besides playing a role in the anovulatory infertility of PCOS, insulin resistance in PCOS is associated with an increased risk of hypertension13,14, dyslipidemia15-18, type 2 diabetes19-23, metabolic syndrome24, and cardiovascular disease25-29.

The above observations suggest that the hyperinsulinemia of PCOS plays an important role in the hyperandrogenism of the disorder. However, these observations also suggest a contradictory tenet to the insulin resistance hypothesis in PCOS: while PCOS women are "insulin resistant" in terms of glucose disposal, their ovarian tissues remain sensitive to insulin's stimulation in terms of testosterone biosynthesis. In an attempt to provide a unifying hypothesis for these phenomena, we propose that ovarian androgen biosynthesis and glucose homeostasis in PCOS may be mediated via a signaling system for insulin that is separate from the classical tyrosine phosphate signaling mechanism.

Some actions of insulin may involve low molecular weight inositolphosphoglycan (IPG) mediators, also known as putative insulin mediators or second messengers30-32. When insulin associates with its receptor, mediators of this class are generated by hydrolysis of glycosylphosphatidylinositol lipids and/or proteinated species located at the outer leaflet of the cell membrane. Released mediators are then internalized and alter the activities of purified enzymes33,34 and the metabolism of intact cells32,35 in an insulin mimetic fashion. Two different IPG mediators have been extracted from rat liver36. One of these is the D-chiro-inositolphosphoglycan mediator (DCI-IPG) which activates pyruvate dehydrogenase (PDH) phosphatase. The other IPG mediator is the myo-inositolphosphoglycan mediator (MYO-IPG) which inhibits cyclic AMP-dependent protein kinase (PKA). These IPG mediators may mediate the alternate insulin signaling mechanism.

Over a decade ago, experiments from our laboratory examined whether IPGs mediate insulin's steroidogenic actions in human placental tissue. In studies using placental cytotrophoblasts isolated from human placentae, purified liver extracts containing either the MYO-IPG or the DCI-IPG mimicked insulin's inhibitory action on aromatase37 and stimulatory action on 3â-hydroxysteroid dehydrogenase38 in a concentration dependent fashion39. In this system, it was also shown that MYO-IPG may be more potent than DCI-IPG39. Preincubation of the cytotrophoblasts with a polyclonal antibody that blocked IPGs completely abolished insulin's ability to either inhibit aromatase or stimulate 3b-hydroxysteroid dehydrogenase activity. These studies suggested that the IPG system may be responsible for transducing insulin's regulation of human placental steroidogenesis.

The results of these studies demonstrated that a synthetic DCI-IPG (INS-2) mimicked insulin's stimulation of thecal testosterone biosynthesis in a dose-responsive manner and to a degree at least equal to that of insulin. These studies also suggested that IPG mediators may serve as the signal transduction system for insulin's stimulation of human thecal testosterone biosynthesis. It is important to note, however, that these studies were not designed to identify which of the many IPGs was primarily responsible for mediating insulin's action on steroidogenesis, but as reported previously, the MYO-IPG was more potent in human placental steroidogenesis than DCI-IPG.

IMPROVEMENT OF INSULIN SENSITIVITY IN PCOS BY D-CHIRO-INOSITOL

Besides IPGs' role in transducing androgen production in PCOS, available data suggest that the IPG system also mediates glucose metabolism. Among the different species of IPG mediators that have been identified, several lines of evidence support the hypothesis that a deficiency specifically of DCI-IPG may result in insulin resistance. Although several studies have linked insulin resistance (as determined by the hyperinsulinemic-euglycemic clamp technique) with decreased urinary excretion of total DCI45-48, large urinary losses of DCI have been shown in both type 1 and type 2 diabetes using a more sensitive gas chromatography/mass-spectroscopy technology49. This urinary loss of DCI was out of proportion to that expected in diabetic glycosuria. Furthermore, significantly decreased muscle DCI-IPG bioactivity and decreased total DCI content have been noted in needle biopsies48 and autopsy specimens50 from type 2 diabetic subjects compared with controls. In a study of rats, intragastric administration of DCI significantly decreased hyperglycemia in low-dose streptozocin rats and improved glucose tolerance in normal rats51. Administered intravenously to monkeys with varying degrees of insulin resistance, DCI accelerated glucose disposal and increased the rate of decrease of plasma insulin51. These observations suggested that a deficiency in DCI-IPG may lead to insulin resistance, and that exogenous administration of DCI may enhance insulin sensitivity and improve insulin action in insulin-resistant individuals.

As reported in preliminary form, urinary DCI clearance was 5-fold higher in PCOS as compared with normal women (p=0.006). Urinary DCI clearance was also correlated inversely with insulin sensitivity as defined by the Bergman minimal model (p=0.0003). Furthermore, DCI-IPG release was impaired in response to insulin release in women with PCOS upon oral glucose challenge, as shown by a 3-fold AUCDCI-IPG/AUCInsulin decrease in PCOS (p<0.0001)52.

These results confirmed a functional deficiency of DCI in women with PCOS, and suggested that DCI deficiency may be related to increased urinary DCI clearance and may contribute to insulin resistance of the syndrome. These data also corroborated a previous study showing that urinary DCI excretion was increased in insulin resistant states49. However, these data did not rule out the existence of either an intra-tissue deficiency of DCI, or a defect in incorporating DCI into the DCI-IPG mediator.

If a functional deficiency of this specific IPG mediator, DCI-IPG, is responsible for insulin resistance in PCOS, then administration of DCI might replenish DCI-IPG stores and improve insulin sensitivity. To test this hypothesis, 44 obese women (BMI >28 kg/m2) with PCOS were given DCI 1200 mg orally or placebo once daily for six to eight weeks53. Fasting serum steroids were measured and oral glucose tolerance tests were performed before and after the treatment period. Serum progesterone was obtained weekly to monitor for ovulation.

The above study showed that administration of DCI enhanced insulin action in PCOS, thereby improving ovulation and decreasing serum androgen concentrations. DCI administration in PCOS also ameliorated components of the metabolic syndrome. These results support the idea that the insulin resistance of PCOS is, at least in part, related to a functional deficiency in DCI, and presumably DCI-IPG.

Since DCI deficiency seems to contribute to insulin resistance in PCOS, we wondered whether some of the beneficial effects of insulin sensitizing drugs in this disorder may be mediated by improvements in DCI-IPG release. We utilized stored serum samples from a study where we administered metformin or placebo for 4 to 8 weeks, and quantified DCI-IPG release from these stored samples55. Nineteen obese
(BMI ³ 27.5 kg/m2) women with PCOS who took metformin (n=10) or placebo (n=9) were investigated. Insulin and DCI-IPG release during an oral glucose tolerance test were assessed. Treatment with metformin decreased the AUCinsulin (±SE) compared to placebo during oral glucose challenge (-3574 ± 962 vs. +1367 ± 1021 mIU/min x ml, p=0.003). In addition, after metformin therapy, the bioactive DCI-IPG per unit of insulin (AUCDCI-IPG/AUCinsulin) increased by 160%. In comparison, this value decreased by 29% after placebo (p=0.002). This study suggested the possibility that metformin improved insulin sensitivity in PCOS in part by improving insulin-stimulated release of DCI-IPG mediators.

In summary, these findings support the idea that DCI deficiency contributes to insulin resistance in PCOS. They further suggest that DCI deficiency in PCOS is unrelated to adiposity, since it appears to be present in both obese and lean women with PCOS. In addition, exogenous DCI administration in lean and obese women with PCOS can overcome DCI deficiency and alleviate insulin resistance in the disorder. Finally, some of the improvement in insulin sensitivity mediated by metformin may be related to an improvement in insulin-stimulated release of DCI-IPG mediators.

A UNIFYING HYPOTHESIS: THE ROLE OF IPGS IN BOTH GLUCOSE HOMEOSTASIS AND HYPERANDROGENEMIA IN PCOS

The above findings present us with an apparent paradox. If IPG mediators are responsible in part for mediating insulin sensitivity and also transducing ovarian andgrogen production, then one might expect that a deficiency of IPG mediators in PCOS would logically lead to insulin resistance and a low level of circulating androgens. DCI administration would therefore increase circulating androgens in women with PCOS. Yet this is not the case since DCI administration to women with PCOS improves insulin sensitivity, improves ovulation and lowers circulating androgens53,54. How does the IPG transduction system explain both the insulin resistance and the hyperandrogenism of this disorder?

In this regard, it is important to emphasize that while studies have shown that DCI-IPG deficiency in PCOS may contribute to the insulin resistance of the syndrome, studies in steroidogenesis have not identified which of the many IPGs are responsible for transducing insulin's signal in vivo for testosterone biosynthesis. In human placental cytotrophoblasts in vitro, MYO containing IPG seems to be more potent than DCI-IPG in mediating steroidogenesis39. We postulate that MYO-IPG, but not DCI-IPG, may be the primary mediator for testosterone biosynthesis in PCOS, although this theory awaits validation by further studies. In contrast, evidence suggests that DCI-IPG mediates insulin sensitivity in PCOS.

Figures 1 A-C depict our hypothesis. Levels of DCI-IPG and MYO-IPG are normal in the absence of PCOS (Figure 1A). In PCOS, a functional deficiency in DCI-IPG exists as supported by available data, and we hypothesize that there may be an increased level of MYO-IPG due to compensatory hyperinsulinemia resulting from insulin resistance (Figure 1B). Administration of DCI restores normal levels of DCI-IPG, and may improve insulin sensitivity. Decreased circulating insulin then results in decreased MYO-IPG release, reducing ovarian testosterone biosynthesis (Figure 1C). To date, we have preliminary data supporting a functional deficiency of DCI in PCOS52. Additional studies are underway to assess whether there is an excess of MYO-IPG in this disorder. 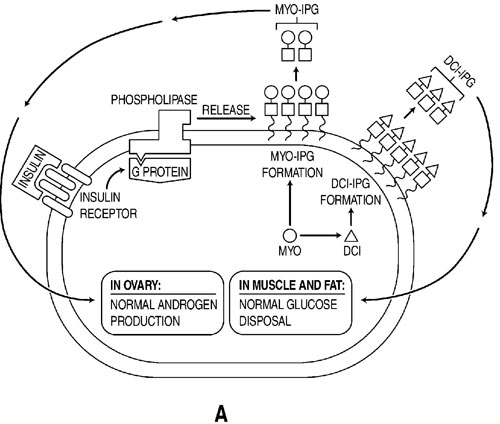 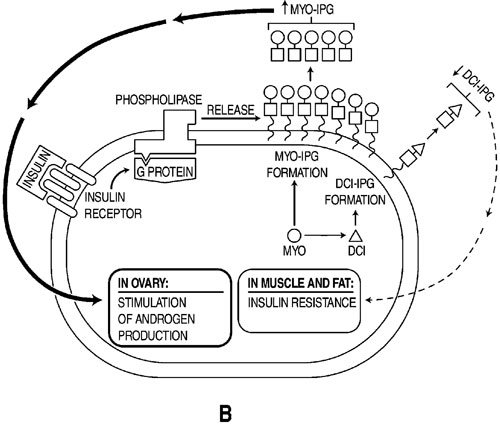 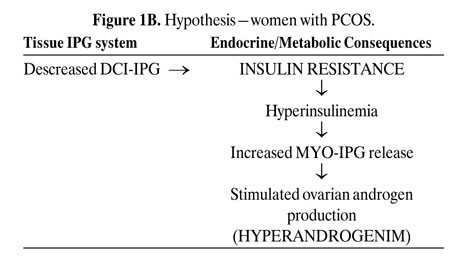 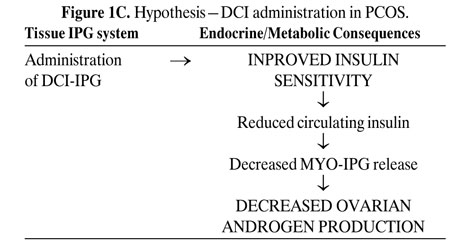